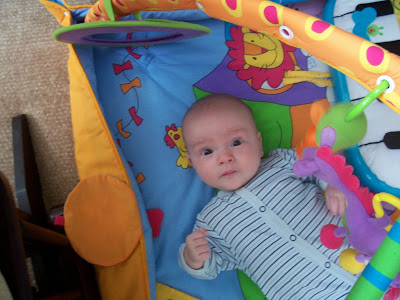 I'm late again since Jack was three months over a week ago, but better late than never.

Fact #1. Jack laughs alot now and smiles like crazy. His laugh is the cutest and best sound I have ever heard and so rewarding because you still have to work pretty hard to get it. I've tried to catch it on video, but the kid refuses to perform. He stops whatever adorable/slash/impressive thing he's doing when we pull out the camera and just stares at us blankly. Its incredibly frustrating.

Fact #2. Jack is OBSESSED with his tongue. He is constantly pushing it in and out of his mouth, sticking it out at people and licking things. He especially loves his tongue in wind, its never in his mouth when we are outside and there is even a slight breeze. He's kinda like a dog in that way.

Fact #3. Jack can hold himself up in a standing position. If we put him in front of the ottoman he'll hold himself up standing for quite awhile until he gets tired and tilts to the side. I always keep my arms right beside him for the inevitable tip, but he's doing better and better at it each day.
Posted by robinm at 2:49 PM