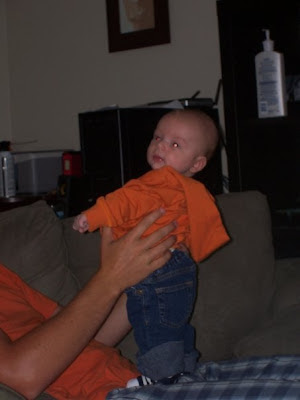 Jack wants to stand more than anything in the world I think. He is soo cute when we stand him up holding onto him and he gets stronger and stronger every day. Now instead of having to support his mid-section we can just hold his hands and he stays standing until he gets too tired and collapses in sheer exhaustion from his efforts. But while he is standing he has the most adorable smile on his face and he gets so excited and breathes soo fast its ridiculous. Lately he's been kicking his feet while standing (he loves to kick his feet whenever he is lying down) and it looks like a little march. It is SO totally and completely adorable of him! I can't wait until he can stand because I think it will just make him the happiest little boy around.
Posted by robinm at 8:03 AM

I worry about posting about my kid too much too. But don't worry, at least for me, I expect it. Plus I find pictures and stories about the little bugger amusing. Having a kid gives you so much more blogger material!