Yesturday I was in our bedroom folding laundry and Jack was being slightly annoying so Branden brought him down to join me. 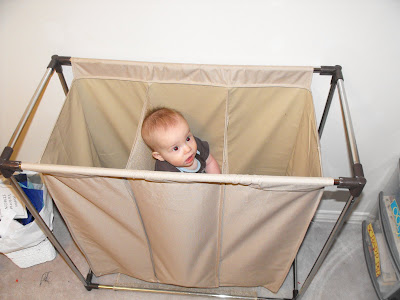 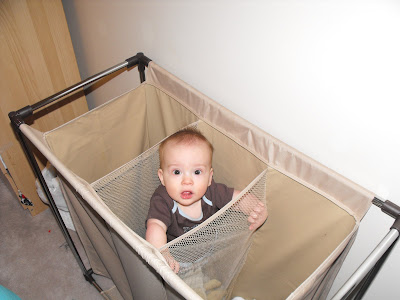 He quite surprisingly enjoyed it ALOT and was perfect the whole time I folded.
Posted by robinm at 6:50 AM 2 comments:

Our new years this year was pretty laid back, but also alot of fun. I unfortunately forgot to take many, wait ANY pictures so that stinks, but it was still alot of fun. New Years Eve our good friends Matt and Suzie came over. They used to live here, but moved to Arizona over a year ago and we miss them so much! It was great to see them. We all went together to the ward NEw Year's Eve party because Branden and I are on the activities committee and had to run the games. It was great to have Matt and Suzies help with Jack while we did that. The gams portion was alot of fun, but due to Jacks need to sleep we left 2 songs into the dance portion. We came back to our apartment and just hung around with Matt and Suzie until new Years. It was fairly uneventful, but fun. I barely made it to midnight. Having Jack has dramatically reduced my ability to stay up late!

New Years day we had a delicious breakfast with Matt and Suzie before they had to leave and then later that day we went to my Dad's family annual Timon new years day party. It was fun and great to see all my cousins I don't see to often. Here's a picture of the giant bunch of us for you! 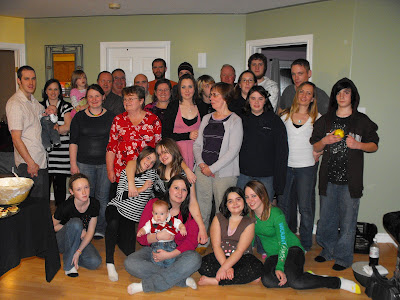 Over a month Late

I have been a major blog slacker lately and its because I find the task of going over our Christmas festivities daunting and have a hard time feeling like I can move on without making note of Christmas. So this morning, when my baby is being wonderful and quietly playing with the garbage (don't worry folks its empty and recently sanitized) I thought I need to just sit down and trudge through this. It will be quick and dirty.

I think one of the most important and exciting things that happened over the holidays was the on Christmas Eve Jack got his first 2 teeth. They are so cute! A two tooth smile is the cutest and most heart meltingest smile on the face of the earth. Unfortunately we have yet to capture a picture of it because Jack just refuses to be cute when the camera is on and he notices it. But this morning I forced a glimpse into his mouth. 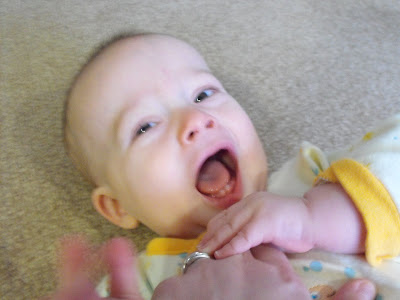 You can see me prying his mouth open here as he screams and pushes me away. Sorry its blurry but atleast you can see the two adorable teethies.

Now I'll move on with the Christmas festivities. Christmas Eve we spent at Branden's parents house, we had a delicious dinner and lots of fun there. Jack was totally adorable playing with his cousin Dorian. 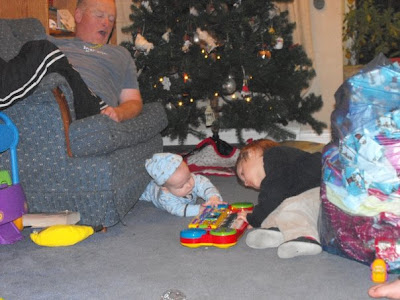 And opening presents from his Grandma and Grandpa. He got some super cute outfits and a really nice, warm stroller blankety thing. 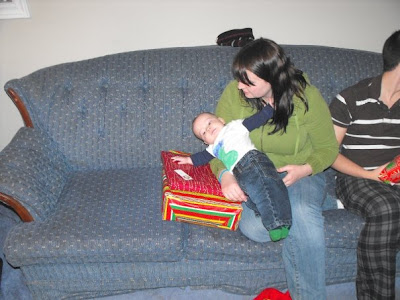 Christmas day we spent with my family. We had a wonderful breakfast and then opened presents. Jack loved all the multitudes of paper he was able to play with there. It was a HUGE challenge for his Grandpa to not immediately whisk all paper right into the trash, but anything for a grandson right. 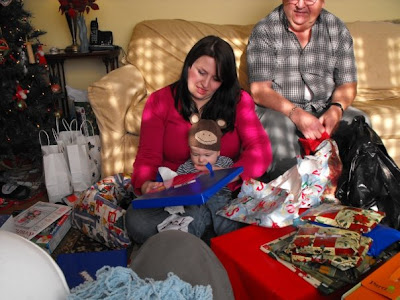 Jack got some great presents, adorable clothes and a walker toy and other random toys from his Grandma and Grandpa. A Little People nativity scene and cute Christmas outfits from his Aunt and Uncle and the softest, best blanket ever that he LOVES to rub on his face from his Great Aunt and Uncle who came over to visit later in the day. 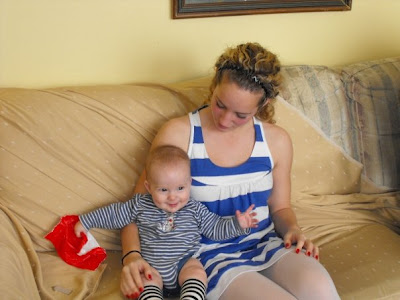 Jack with my cousin Zach's girlfriend Kiera. They had matching outfits, I thought it was adorable and Jack seriously adores Kiera as you can tell from his face. 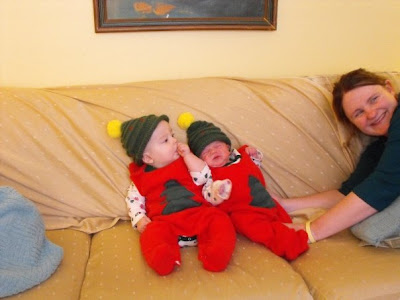 With his cousin Thomas in the matching outfits Aunt Sarah made them.

After presents we had a delicious dinner and then let the boys play. Jack loved the giant box Grandma and Grandpa's new tv came in. We made him a fort. 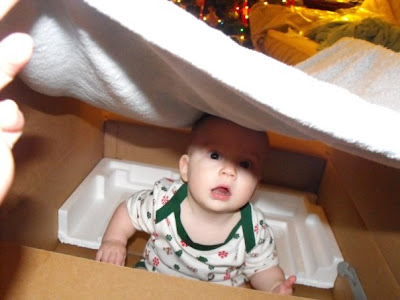 All in all Jack's first Christmas was great!
Posted by robinm at 6:06 AM 1 comment:

One of Those Days

Do you ever have one of those days where you are just at the end of your rope. Today is that day for me. My nerves have been frayed all day. Jack and I have been sick, sick, sick the last few days and we're getting over it now, but we're still exhausted and not quite right. Jack was a trooper when he was super sick. He was so good and barely cried through a hacking cough, massive fever, near dehydration, not eating for almost 24 hours straight and boogery face, but now that he just has the remnants of the cough and boogers he is so whiney! and I feel terrible because he's honestly been getting on my nerves all day. How does an 8 month old get on my nerves you may ask?

Well first, he's not eating and that equals pain and confusion and worry and well annoyance for his Mommy. He's slowly been working his way onto more solids and off of more breastmilk the last few months, but he still needs a few milk feedings each day and night, but since he's been sick he's been refusing which leaves me feeling like I'm about to burst. Add to that he doesn't refuse in a polite manner. He screams, kicks and fights me and when I get him close enough he bites, gnashes, scratches and pushes at me. It is painful and oh so annoying! And I just don't get why he's doing it! ARGH!

Next, he is just not himself. He is usually so much fun, he's a really independent and chill kid. He loves attention, but is also fine taking care of entertaining himself when I'm busy as long as he can see me. But the last few days he's just been fussing and whining and crying and wanting up, and then down and then up and then down. ARGH!

Anyways, add all these things to the fact that I am still sick and I am at the end of my rope tonight. As soon as Jack went to bed (early after another frusterating feeding attempt) I lied down to rest and do NOTHING tonight thinking I deserved it, but then I started to think and first I thought and felt bad for being so easily frusterated with Jack. I mean he's sick and I'm sure there is a good reason for his odd behaviour in there somewhere and he's just a baby. So I got up, slumped down the hall to his room kissed him and apologized for being such a short tempered Mommy. Then I came back to do nothing, then I realized that doing nothing is BORING and was not going to make me feel any better so I started a most delightful craft project (the details of which I will reveal when its done). and now I'm here writing about to go to bed and suddenly I feel like I can handle life again, I feel like a better Mommy because when Jack woke up a bit ago I cuddled and rocked him and he actually ate! yay! I just hope tomorrow brings me alot more patience then today had.
Posted by robinm at 7:22 PM 2 comments: 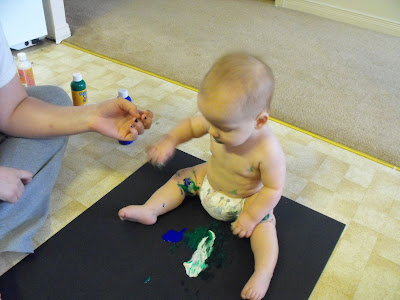 It has been ages since I have blogged and with all the holiday-ness that has occurred I have quite honestly felt to overwhelmed to begin. But as several people have pointed out to me it is time to return to my blog and since I am still too overwhelmed for holiday tackling I'll start with something new and fun.

Last week Branden and I were discussing doing more organized things with Jack instead of just playing/tickling/slash/throwing him around we thought maybe he was in need of some activities. Boy were we wrong, but some entertainment did occur.

So in our discussion we determined to try finger painting. I grabbed some finger paints and bristol board from the local dollar star and on Friday we tried our new activity. Being parents with much foresight (ha!) we stripped him down to his diaper and let him have at it. All went quite well at first he was very entertained by the gooshiness and slidiness of the paint and since he was only in a diaper it didn't matter that when he got excited by this he was smacking his thighs in an uproarious manner. He got paint everywhere and we didn't care until his adorable old habit of sucking his thumb smacked us right in the face. He shoved that blue/white and green thumb right on in his mouth without either of us even noticing. 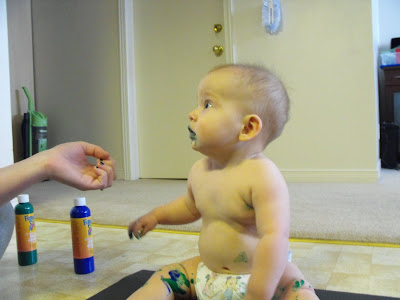 The best shot we could get while hurriedly trying to whip him off to the tub.

Branden noticed first and gave a yelp and began making sure the paint was non-toxic (it of course was) I whipped that thumb out of his mouth so fast and was able to see the damage, his teeth, lips and tongue were a variety of colours and he looked quite angry about the bad taste! Unfortunately mine and Branden's somewhat surprised reactions somewhat scared the dear boy and when he's scared he sucks his thumb so as we wrestled him down the to tub (making sure to stop for the camera) and tried to wipe of his thumb and mouth we were fighting that old habit and let me tell you my baby has some serious muscles when he wants his thumb. It was quite hilarious and we have his short lived artwork proudly displayed on our fridge. But believe me we will not be trying activities again until the child understands finger paints and thumb sucking are not friends. 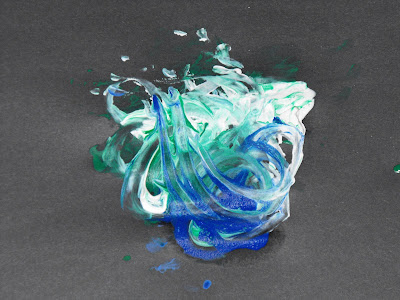