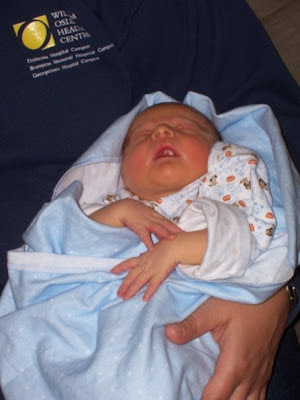 Yesturday we were at my parents house (more on that later) and on the car ride home I said to Branden would it be ridiculous to pray that Jack only wakes up once tonight. To which Branden responded with a hearty course of laughter at the utter ridiculousness of the thought of Jack only waking up once in a nice. Jack is slowly getting to be a better sleeper, but has only managed 2 nights of waking up twice and regularly is up 3 or 4 times (which is a miracle in itself since it was for along time 6 to 8 times a night.

Well last night my son must have been drugged because he only woke up once! I am almost hesitant to write about this. I feel like I might curse it and he'll be back to 8 times tonight or something ridiculous like that. But last night he slept from 9 until 3:30 and then 3:45 to 7:15. It was insane and I feel so rested today, its like I'm a whole new person when I actually get 8 hours of sleep.

Seriously I pray this keeps up, but I'm afraid it won't. Hope for me please!!
Posted by robinm at 1:01 PM