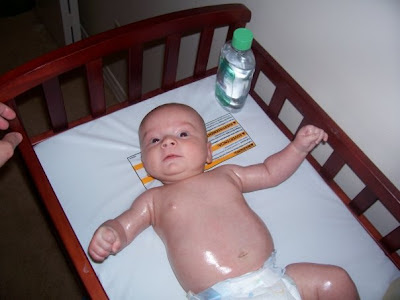 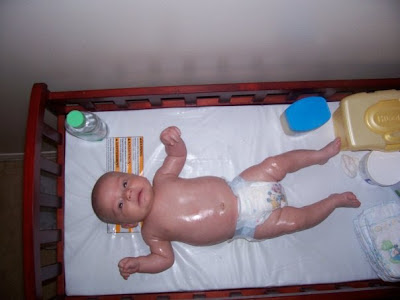 So this afternoon I was baby oiling up Jack's head to take care of a minor case of cradle cap thats been bugging Branden and I and while getting the baby oil from the bottle to his head I kept dropping it all over his torso and he was getting quite a little pile o' baby oil on his tummy. So I thought it would be a good idea to just rub it in all over his little body so he could be nice and soft everywhere instead of just wiping it off. Well there was so darn much spillage of baby oil that by the time I rubbed it in he was all oiled up and shiny like Arnold Schwartznegger in his body building days. I was still laughing to myself thinking what a hilarious thing to happen when I went to pick him up and take him to the bath tub and realized that a wiley, squirmy baby covered in oil IS NOT a safe thing. He was so slippery and the little guy nearly wriggled and slipped his way out of my arms (he, of course, realizing my compromised position with him being all oiled up decided to wriggle like there was no tomorrow). I have learned for the future not to do things just because I think they are funny because one day I will drop my child as a result.
Posted by robinm at 10:45 AM