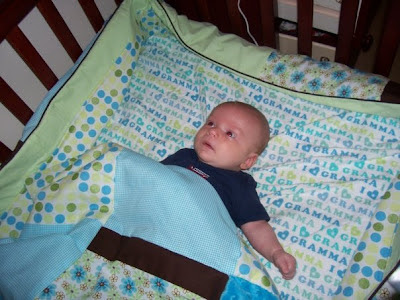 With a young baby the Mother tends to be slightly sleep deprived at all times and this weekend was one that I was especially sleep deprived thanks to my painful toe. Last night at approximately 2am I woke Branden up and asked him to take Jack back to his room. Branden looks at my chest and there is no Jack, I look at my chest and there is no Jack. Branden starts frantically looking around for Jack convinced that since I said he was in the room he must be. He looks beside me, on the floor, under the covers and is really starting to get upset at this point quite sure that I have rolled over on our child and killed him. We are both starting to freak out when I realize. I didn't have Jack with me I had fed him on the couch and returned him to his crib earlier and had gone to bed myself. Apparently I had just gone insane in that time and thought he was still with me. It was quite a relief when we realized Jack was happily asleep in his crib, safe and sound and the only problem he had in life at the moment was a sleep deprived and insane Mother.
Posted by robinm at 5:20 PM

Hahaha, you are absolutely Hilarious Robin :) Your blog entries are the best, and your little boy is so cute :)

Oh funny, in a sad sort of way. I've had dreams where I thought I was holding my baby and woken up without him. But nothing like your situation. Hopefully you'll be getting better sleep soon.