Things that Make me a Bad Mother 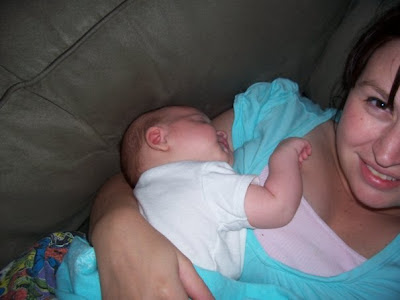 In general I think I'm a pretty good Mother. I keep my son alive and happy for the most part, but there are several things that definately bring the quality of my mothering skills into question. (by the by the "for the most part" totally applies to the happy part, not the alive part no worries!)

1. Whenever Jack gets so upset that he begins throwing a right fit, I just watch. I hold him up in standing position and watch him scream and pout and stomp his little feet just because he looks so funny/slash/cute doing it. I even go so far as to call Branden over to watch with me and we both laugh as Jack gets more and more upset (in the most adorable way possible)
ntr
2. I think it is absolutely hilarious when Branden is holding Jack and Jack gets upset and Branden then deals with this by threatening Jack that he will never teach him to ride his bike,therefore making him a social reject if he doesn't get it under control.
3. I strongly encourage him and even force the poor little 2 month old to pick his nose. I HATE his baby boogies, those suction things suck and my fingers are far to fat for his nose, so I use his finger to grab those little baby boogies. This will so make my baby that creepy kid in the corner who picks his nose in public, but oh well.

I'm sure there will be many more that come up over the months and years, so perhaps I will keep a running list.
Posted by robinm at 2:32 PM

hahahahahaha - too funny! and you're a great mom - I just love what you posted! Maybe I'll post something similar on mine :)