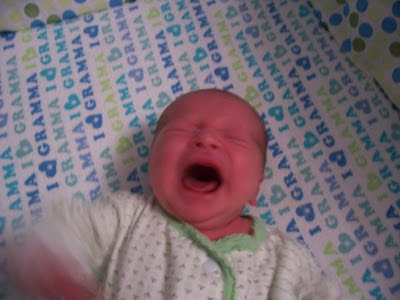 Jack screaming like he does when a "hurpee" hits!

Jack, like many other babies, gets the hiccups pretty much all the time. They are not the normal hiccups that I am used to, they are body shaking hiccups that take over his entire existence and they come one right after another with no break. These hiccups enrage Jack like you would not believe, he screams, he cries and throws a regular fit. He gets himself so upset that he doesn't even notice when they are gone and screams well past the point they have disappeared.

Even worse than these horrendous hiccups though are his hurpee's. The "hurpee" is a combination of a hiccup and a burp and they shake his little body to the core like you would not believe. He hiccups and burps simultaneously and its just a catastrophe. When Branden and I here a hurpee erupt from Jack's little mouth we cringe in terror at the fit that will inevitably ensue as we watch our poor son suffer through this horrible plague and scream and scream and scream. In my little world now, the hurpee is the worst thing that could happen in a day.
Posted by robinm at 7:26 AM