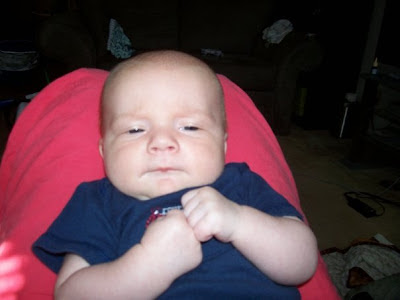 My dear and wonderful son Jack has fists of fury. He could honestly challenge Chuck Norris as he is constantly prepared for a fight. Whenever Jack is sleeping, sitting, laughing, smiling, playing, bathing, ANYTHING he has his little hands bunched into fists held tightly in front of his little body. It is so cute and completely adorable until he turns those little fists of fury against you.

Whenever Jack gets annoyed, frustrated or mad at me or just in general he uses those fist of fury to inflict harm and it hurts as shockingly large amount. He will punch me right in the face when I'm feeding him if he doesn't like something I have done. He has punched me in the throat when he has a dooky diaper and I'm not taking care of it fast enough and the piece to resistance the other night when I was feeding him I saw that little fist start going and suddenly he unclenched it a slapped me, open palmed right across the face.

For real my child is going to be a figher and VIOLENT, I think I'll have to find a healthy way to filter this as soon as possible.
Posted by robinm at 5:22 PM