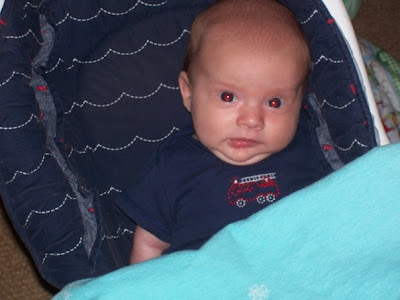 Branden thinks Jack looks like the Devil here.
Its hard to believe that as of yesturday my little Jackers is already two months. Its gone by shockingly fast (especially since I never thought the first week would end). But he is two months so here are my two facts about Jack.

1. Jack is at the stage in his development where he will latch onto just about everything and anything you put close enough to him. His favourite thing to latch onto is his Daddy's nose. It's pretty hilarious to watch as Jack sucks away on Branden's big ol' nose. But he definately doesn't limit it just to noses, he's latched onto cheeks, collar bones, arms, pretty much anything you put in front of him.

2. Jack has become quite the little copy cat. It is so fun to watch him because he will study his Daddy or me and try his very hardest to imitate what it is we are doing. From pulling weird faces, to noises we make, pretty much anything we do he will try to copy (as long as he's paying attention to us) its really adorable because his face gets so serious and studious while he is doing it.
Posted by robinm at 12:30 PM