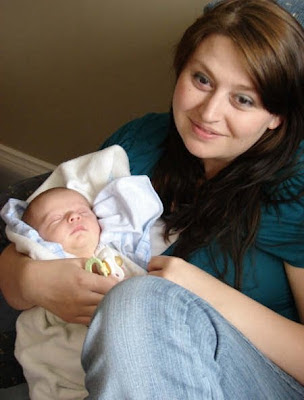 When I first had Jack, the first month or so I remember that people would always say to me how much they missed having a new born, what a great time it was and how seeing Jack made them want to have another baby. And I remember thinking to myself "are these people insane!". For the first month of Jack's life I was convinced he would be an only child. I mean I loved him and was enjoying every minute as much as I could, but at the same time I was only getting maybe 4 hours of sleep a day, the horror of his birth was still fresh in my mind and the hideousness of pregnancy still loomed over my head (as well as the aftermath on my physique) But honestly a few weeks ago I started really, really wanting another baby and to be pregnant ASAP. Who would have thought it would happen so soon. I honestly feel so baby hungry and like I want to get pregnant again right now. Its really weird for me because I've never really had that baby hunger thing. I always knew I wanted children in a vagure future sense and Jack just kind of happened and I'm so delighted to have him, but i never had this baby hunger that now plagues me. Obviously I won't be getting pregnant again right now, it would just be too much of a sacrifice at the moment. For me and for Jack because I would have to go back to work now when Jack is so little,instead of when he is one so I could qualify for another maternity leave and I"m just not prepared to leave him yet (it will be hard enough when he is a year, I can't even imagine it at 2.5 months). I seriously just think its wierd to want another so soon when at first I just thought I would never desire to do all that again.
Posted by robinm at 3:21 PM

I felt the same way, it is pretty weird, maybe its because we are so sleep deprived! LOL. Jack is such a sweetie by the way! Love reading up and hearing how you are doing!

hahaha,, you're probaly right about it being because of the sleep deprivation and thanks, I kinda think he's pretty adorable.

Once you catch baby fever it never goes away! Jenna is 7 now and I still want another one...but now with the age span and Ethan's autism...it doesn't make sense to start all over again. That is why I babysit my friends babies as much as I can. Get the fix and send them home! LOL

I don't know if I've fully experienced "baby hunger" in it's full form yet. I've definitely felt it tugging at me as every. single. married friend that I have has recently announced she's pregnant or has just had a baby! haha

I often have dreams about babies though...

But seriously--with a baby as cute as Jack, how could you not want another asap? :)

oh my goodness robin - i felt that baby hunger thing RIGHT after Sarah was born!!! But I know what you mean - you wonder...what the heck! where did this come from? especially after being prego for WAY too long...lol....it's so sweet to read it from another mom though who also has felt the same way :) I am enjoying your blog so much!