A Poop and a Smile

Earlier today I was sitting on the couch, typing away on the computer while Jack snoozed happily in his swing when I hear a pile of grunts arupt from him. Now grunts from my Jackers mean one of two things. A-that he is about to wake up and want to eat IMMEDIATELY or B-that he is about to let it rip. So I sat listening and waiting to see which of these two issues I would need to attend to. Then I hear it an absolutely giant and very, very wet toot and then my little boy smiles as wide as I've ever seen him do. I guess it was a major relief to him. I get up to attend to the problem, when I hear it again another very large, very wet toot followed by a giant smile full of relief. At this point I start to worry, two huge, wet toots like this in a row is danger zone. I pick him up to go change his dookie diaper and Branden sees it, the poop brigade making its way out of Jack's diaper and onto his outfit. This is never a pleasant thing to deal with.

At this point I continue down the hallway to change his diaper cursing the elastics on his Huggies giving way to the rush of poop and Branden heads to the shower as he had just finished work. I removed Jack's clothes and diaper and was placing the new diaper under him when it occured, a rush of pee streaming all over the change table and Jack himself. I curse myself for not covering him up quickly as I normally do as I cleaned up him and the changetable and just as I set him down it happens again a stream of pee shoots up and it gets all over his face and the changetable and everything. He and the table were soaked and a wipe was just not going to do the trick. So I run into the bathroom where Branden is showering with the door locked and yell at him over the water to let Jack and I in. Which he tries to do, but takes forever because his hands were soapy and he couldn't get the door unlocked and open. All this time he is fiddling with the door I am holding a buvck naked Jack PRAYING he does not poop or pee on me. Finaly Branden gets the door open and I shove Jack into the shower with him fully expecting a Jack meltdown, but knowing he needed shower power to take care of the disgusting mess he had just made. But not freak out was heard, he loved the shower and was smiling away as his Dad showered him down. It was the most adorable thing I had ever seen and if it hadn't involved two naked members of my family I would have taken a picture.

Branden finishes showering Jack and passes him out to me where I have the only towel available (a giant man sized towel, not baby towel) waiting to dry of Jack when what does Jack do, but vomit all over himself and the towel. UGH! What a messy boy, deciding to empty himself everywhere from every end all at once. It was such a hilarious/slash/cute catastrophe.

And here is a picture of him after all that was said and done. 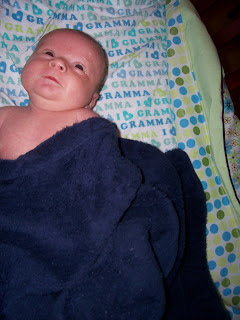 Robin I am thoroughly enjoying your blog. BOth of your recent entries were very enjoyable to read :)

I am laughing my bum off right now! Sooo funny! Reminds me of the good ol' days! Sounds like Jack is gonna be a handful!

haha SO cute! i am quite excited that you finally decided to start a blog and have enjoyed profusely reading all these entries. why did i not know about this occurrence sooner?