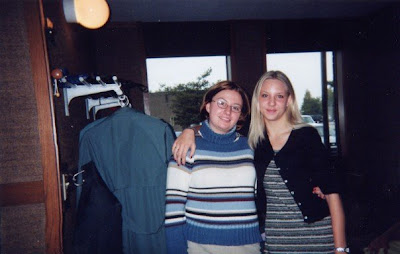 Hilary and I on better days (although not THAT MUCH better UCK!)
One time when my good friend Hilary and I were a mere 14 years old (or atleast somewhere in that age neighbourhood) we went down to the major metropolis of London to visit my brother and babysit his oldest over night for him and his wife. There was many an adventure that night, but I will not discuss that here for fear of far to much embarrassment. However the next day when my brother and his wife returned home to relieve us our babysitting duties we headed on over to the mall. We were shopping and looking around and happened upon Le Chateau which was a store that at the time was unfamiliar to us. We were looking around and saw these fabulous Neon Blue and Neon yellow Lycra skirts. We thought they were so fabulous and hilarious so we decided it was necessary for us to try them on. We went into our separate change rooms to try them on, we were positioned in change rooms on completely opposite sides of the store. Once we had them on I scurried on over to Hilary's change room to laugh with her at our wonderful skirts. We were in the changeroom together laughing hysterically at our skirts, which fit most oddly being far to large at the top and small at the bottom when we hear the saleslady speaking to us from the other side of the curtain. This sales lady most snottily informed us that these were not skirts they were tube tops. We were soo embarrassed. Seriously how retarded, stupid and just plain newbieish were we that we didn't even know tube tops existed to know that those "skirts" could possibly be tops. I scurried back to the other changeroom as fast as I could, with a face redder than could be. We changed and were out of there as fast as we could. We were soooo embarrassed, but it was so hilarious for us!
Posted by robinm at 8:01 PM

hahahaha oh the many memories of that weekend. remember how about 20seconds after we got there i managed to shut my hand in the window also? and your neice hit me on the head with one of those hard pop up toys? and two other specifics that i will not relate on this but you know what they are.
but the tube tops, how amatuerish of us. we were so innocent. haha