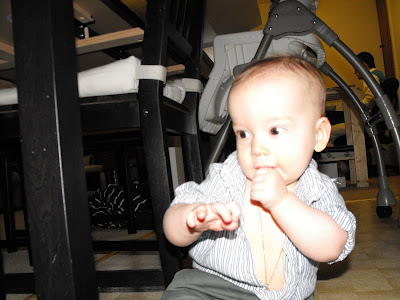 It has been way to long since I've posted. Lots has happened, but I'm too lazy to go into detail. I feel so unmotivated to blog lately, mostly because some days I'm pretty sure only my Mom really misses my blogs.. haha. Good ol' Mom's. Anyways I think I'll do a quick update on life in our neck of the woods.

Jack is getting cuter and more adventurous by the minute. His favourite place currently is the bathroom. We do our very best to keep the door closed at all times, but trust me if we forget that kid will bolt for that bathroom with speed you have never seen. He will spend hours trying to scale the side of the bathtub, recently discovered he can throw his toys in the toilet and has an ever growing love of unrolling the toilet paper with a mighty vigour.

The other day we found him scaling a bookshelf, crazy kid. He is so infested with bruises all the time lately. He face planted off a kids lap in primary in sunday, has a joker-esque bruise extending in a perfect line from the corner of his mouth up his cheek from falling on the edge of our tv stand and has a perfectly carpet burned nose from propping himself up on his face when he feels the need to be on his knees and use his hands beneath himself.

He also loves books, but prefers the adult kind to his lovely board books. He spends hours each day ripping all the books of the bottom shelf and then pretending to read them. He's hilarious.

He is getting more and more vocal all the time. He has dada, mama and baba down and the other day he was playing in the corner and dropped a toy and Branden and I both swear he said Dangit.. it was AMAZING but we can't get him to repeat it. I wish we had it on video you would all die laughing. 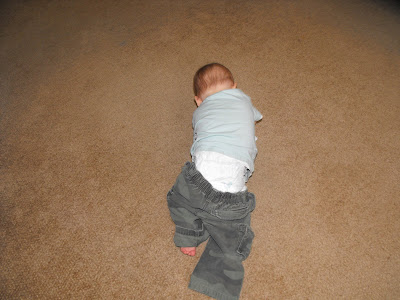 Jack in the process of crawling out of his pants.
Jack is working on getting the top two teeth through which makes his bowels, shall we say, slightly loose. This has resulted in him losing 1.5 pounds this week (according to my wii fit which I weigh him on several times a week) He's gone from about 19 pounds down to 17.5 pounds. its ridiculous. He's rather skinny right now and the other day he crawled right out of his pants. 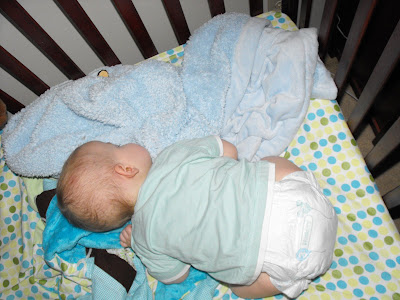 Jack is finally sleeping well. Its amazing and consistent (except when teething) and has been for a few weeks now. I've been afraid to even mention it for fear I would jinx it. But it appears good sleeping Jack is FINALLY here to stay. He sleeps 12 hours straight most night and has a 1.5 to 2.5 hour nap each afternoon (depending on how tired he is) Its amazing and I love it.

We are also spending alot more time outside and Jack loves it. He's still not fully comfortable with grass and swings and slides and everything, but whenever we go he figures it out a little more and loves it a little more. 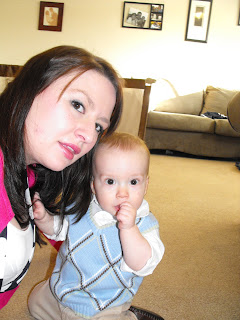 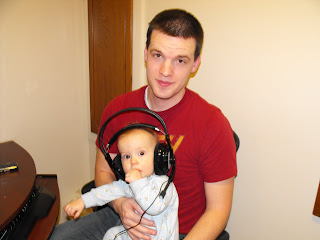 Sorry no pictures of us together lately, just with Jack
As for Branden and I we are doing well too. Branden is heading into the end of the semester, so is going into a busy time, but is doing well in all his classes. He has a job lined up for the summer, its a really great one at a great company right near us. Which is AMAZING since we have only one car and i'll be needing it in May.

Me I am dreading going back to work. May 11th is my official return to work date and we still don't have day care firmed up for Jack so I'm a little stressed about that. I don't really want to go back. I love spending my days with Jack so much. But there are parts of going back I'm excited about.... like more money and adult interaction every day and more affirmation.

anyways thats all for us lately, I'll try and blog more often.
Posted by robinm at 6:47 PM

Ok correction--IIIIIII miss your blog, and I am not your mom. I love your Jack tales!

apparently jack is punching someone with a chain on. what a gangster. you look so pretty in your picture with jack! love the pink/black/white shirt combo and your pretty pink lips. and i too miss your blog so do not feel unwanted or un blogloved. jack is hilarious. sierra also crawls out of her pants occassionaly depending on the enormousness of the pants waist band that day it is pretty funny. and shes also obsessed with getting into the bathroom and always ends up with tons of hair clinging to her clothes by the time i get her out. it is disgusting. she always bee lines it for the toilet to pull up on it but i have caught her in time so far. im so jeaous that jack is sleeping so well because sierra has either been teething or sick for the last 500 months and i never get any sleep. it is killing me softly. anyways i love your blog so be better at updating.

i'm glad you updated. i too miss your blog when you don't post!!!! jack is getting so big and cute. i can't wait to meet him and see you!