My Baby loves his thumb a little TOO much! 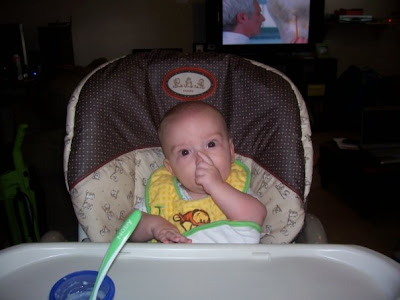 Jack is obsessed with and addicted to his thumb. It is soo cute when he sucks his little thumb, I just love it! I know many people say thumb sucking is a bad thing (for future teeth issues etc.) BUT there is not much I can do to stop and almost 5 month old from sucking his thumb and I really don't want to. His thumb is his new best friend, his surrogate Mommy. We often hear Jack get a little upset during nap time or sleeping at night and automatically 5 seconds later we hear him sucking away on his thumb and we dont' have to wake up. Its delightful. 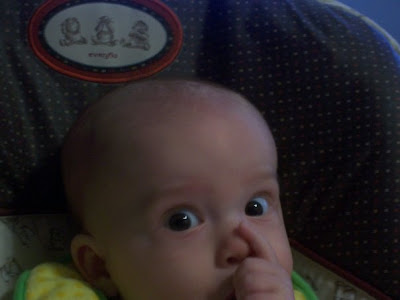 However, lately I think the thumb sucking has gotten a little bit out of control. He is so addicted to his thumb that he won't even let go to eat.  He doesn't suck his thumb when he is playing or yelling (which is most of the day) but when he is sitting, cuddling or being held in general he is all about that thumb and since he is ALWAYS doing one of those three when eating it causes issues. When we are trying to feed him rice cereal (a recent thing we are starting solids a bit early on the advice of our doctor) he will not let go of the thumb. We have to hold both his hands to get the spoon in and then he loves the food, but as soon as we let go of the hands to get another spoon full his thumb is right back into his mouth. This makes a MEGA mess since the food is not only all over his face, but also all over his hands and anything his hands touch. UCK!
He does the same thing when I am breastfeeding him. He tries to eat and have his thumb in his mouth at the same time. Its soooo strange! I have to restrain his arms at the same time as feeding him, its quite a complicated process!
Do you think the church would let me sign him up for their addiction program?? 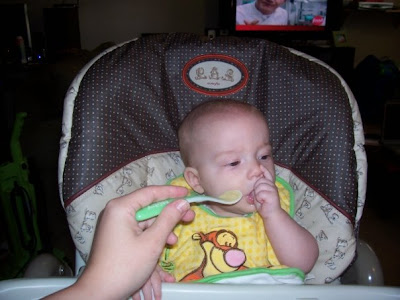 Robin!!! he's so cute and he's growing up so fast. it's crazy. i love the thumb sucking...haha. so silly of him. and i love all your posts. you always have me laughing out loud. you're the best and i sure do miss you! love you!!
jacquie

Ha ha, Lily does that too, fingers always in the mouth, even when eating or nursing. It's complicated. :) Good luck!

Awww, I just love the thumb sucking. How cute is that! I sucked my thumb as a child and I turn out ok, lol.

Jared's not a thumb sucker, but he was absolutely addicted to his paci. In fact it was constantly in his mouth from 4-6 months too. I had a hard time getting pictures without that mouth plug. :) Then it slowed down a bunch. Of course now that he's started walking it's started up a lot again. Althugh he's always needed it for naps and bedtimes.

so...about the immigration stuff. it won't be done by december. lame i know. i could get it done by dec but they told me if i waited til we were married for 2 years we wouldn't have to go back in a couple years and pay more money to renew it. so we figured it's worth it to wait it out for a couple more months. we'll hopefully be home sometime in the winter. if not then spring for sure. i dunno. i'm getty so antsy. it's been so long since i've been home and i just wanna see everyone. jack is gonna be walking or something by the time i see you. AHHH!!!!