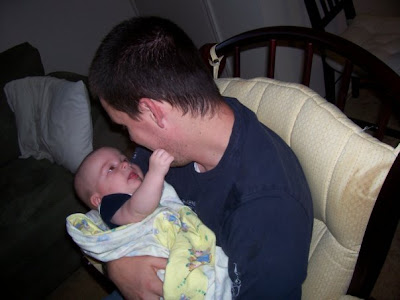 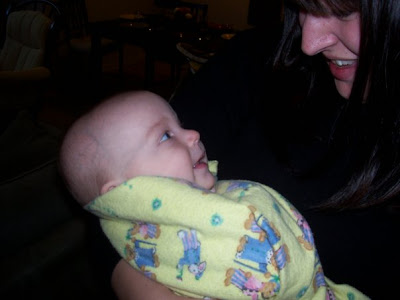 We never really swaddled Jack much, maybe for the first few days of his life and thats it. He just hated it, he woudl kick and scream and kick and scream until he worked his way out. He likes the freedom to move and thrash about. Add to that he's a sweaty beast of a kid who (in the summer when he was really little) hated having blankets on that just made him even sweatier and hotter.
BUT the other day Branden and I thought it would be funny to see what he would do if we swaddled him now that he's bigger. WE thought he'd scream and kick and just be entertaining in general, but he didn't. He thought being swaddled was the greatest thing since sliced bread, he smiled and laughed and cooed, then got frusterated until he got his thumb out, then sucked his thumb while he smiled laughed and cooed. He really thought the whole process was quite funny, until he became bored and screamed, but still it was mucho fun for us!
Posted by robinm at 5:51 PM

hahaha that's so funny! Sierra liked being swaddled for about 2 weeks then she did the same thing. She would wriggle out the second you got her wrapped up. We'll have to try it now too to see if she enjoys it as much as cute little Jack did. haha