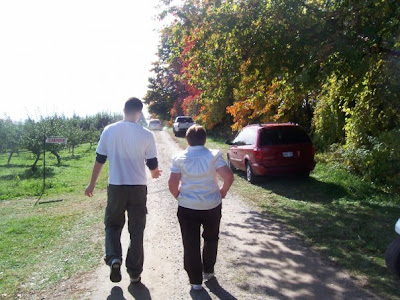 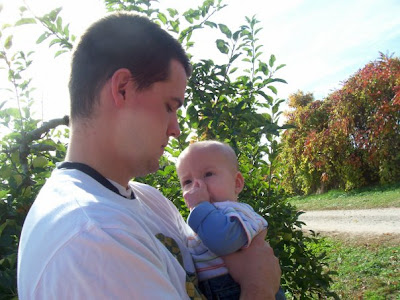 Better late than never, over a week late here comes my Thanksgiving post.
Thanksgiving was pretty great. On Saturday Branden, Jack and I headed down to his parents house in Brampton for the day. We spent the day with his family, visited an apple farm, played scrabble and had a most delicious dinner. It was alot of fun. The only unfortunate part was that Jack and Branden both had major colds and Jack REFUSED to nap so it was major meltdown time earlier than we would have preferred.
Sunday we stayed home, went to church and  Jack and Branden slept and recovered.
Monday we woke up and Jack screamed for 3 hours straight, we thought it would be a terrible day, but packed up the car to go to Brantford to visit my family. He miraculously changed mood and was the best baby all day long. We met my family at the apple orchard and walked around picking apples (usually we all pile on the trunk and drive, but thats not so safe with a 5 month old so it was walking this year) It was alot of fun. Then we spent the afternoon playing board games /slash/ wii mario kart and had a delicious dinner where Jack had his first taste of mashed potatoes. He seemed to enjoy them quite a bit. It was a great holiday and we had so much fun with both of our families.
Posted by robinm at 5:37 PM

Jack is so cute with his thumb in his mouth! I've contemplated trying to force Sierra to suck hers but considering the fact that I sucked mine till i was 8 maybe that's not such a splendid idea. Your thanksgiving ventures sound like a lot of fun! I'm still waiting for ours to roll around in a month! How did they get to be so far apart from eachother?