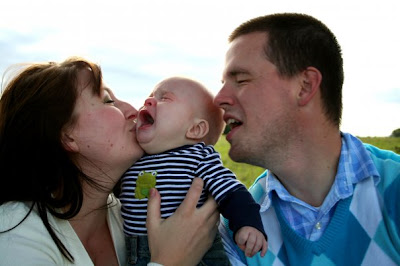 Today Jack is 5 months old. I feel sad and excited! How is his life going by so fast, how can it be that in just 7 months he will be a year old and I will have to leave him and go back to work. UGH! But my baby is 5 months old and here are his 5 facts.
1.Jack doesn't sit yet. He refuses to sit ever, he will not practice so he will never learn. I secretly (or not so secretly now that I'm putting it out in blog land) fear that he will go on his first date and not be able to sit down for dinner. The kid will just NOT sit. As soon as we try and sit him he goes stiff as a board and you have to chop out his lower half to get him to sit. This makes getting in the bumbo, highchair, sitting on my lap all very difficult things.
2.Jack has more to say with every day that passes. He just makes noises all day long, I like to say he has a few words under his belt because his main sounds are "MOooooooom" and "Booooooooob" (I like to think he loves me extra special because he uses these words so frequently) But apparently they are just the easiest sounds for his little mouth to form because he is sooo not knowing what he's talking about, just rambling away.
3.Jack has started reaching for us and I/slash/we LOVE it.  Some days when he is feeling particularily clingy I take him in his bumbo into the bathroom with me and he sits in his bumbo while i shower. Well last week he spent the entire 15 minute shower making "moooom" and "booooob" sounds with a pathetic little sad face on reaching up to me in the shower. It was so cute I wanted to die!!
4.Jack thinks his Dad is the funniest person on earth. I mean he thinks I'm pretty funny and definately gives me and others my fair share of smiles and laughs, but NOONE and I mean NOONE can make him laugh like his Dad does. Perhaps it has something to do with all the silly voiced rhyming about his stinky poop, but he just laughs at his Dad all the time.
5.Jack's life is a song. Jack loves music/slash/singing so we sing to him all the time. We sing about his dookie diapers, about his baths, about each body part as we clean it (including his man bits), about his food and his toys and everything and he LOVES it (even though his mom has a vomity gross singing voice!)
Posted by robinm at 5:28 AM