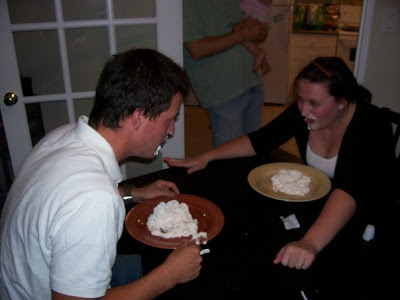 Information about us, idea stolen from a friend.
How did we meet? We met at Erin Puddicombe's going away party when we were like 16 or something like that. Clearly we didn't start dating right away, but were friends for a long time before we actually realized we enjoyed eachother like that.

Where did you go on your first date? Branden's house. His family was out of town so he invited me over, we played monopoly, cards, laughed and joked and talked like mad and watched part of ice age. It was a great first, first date.

How long have you been together? Umm that would depend what you count as the start date, from our first, first date Almost 6 years. From when we got back together after his mission 4.5 years.

Who said I love you first? Him, he said it WAY first and I responded with a rousing 10 minute chorus of "are you sure's?" Then told him I loved him like a month later.

Who is taller? Definately Branden.

Who sings better? Definately Branden, I sound terrible and he's really good. Even though he hasn't sang in like forever because I made fun of him for singing at his farewell (I'm such a bad wife)

Who does the laundry? I do, Branden will change a load now and then for me, but he doens't b elieve in separating colours so if he does it our clothes get dingey. he also doesn't believe in folding so obviously its my job.

Who does the dishes? I do, its the one chair Branden hates most (as much as I hate ironing) he's maybe done them 3 or 4 times our whole marriage (including when we had a dishwasher and you just had to load and unload it!) I don't mind dishes though so its fine and besides when he does them they never get put away in the right place. Sometimes I secretly think Branden does chores poorly so I'll just stop asking him to help.. hahah.. and its not an unfounded thought because he's said its true!

Who pays the bills? I do, but Branden is aware of what they all are.

Who mows the lawn? We dont' have one currently, but when we do Branden will. that horticulture degree has to come in handy somehow.

Who cooks dinner? I do. Branden will occasionally,but then its like chicken nuggets and fries or delissio pizza. I like cooking though.

Who drives when you are together? Until like 4 days ago Branden always did, now me because we took him off insurance to save some money.

Who is more stubborn? I'd go with Branden, although I definately have my stubborn moments too.

Who kissed who first? He kissed me first. I was not the experienced kisser so there is no way I'd venture that. He did it in front of my sister too when we dropped him off at his parents house one night. so smooth. It took me like a month to initiate a kiss in our relationship and when I did I totally forgot to tuck my hair behind my ear so it was just a big gross hair sandwich. I was such a newb.

Who is more sensitive? I don't know, I'll ask Branden.....he says he doesn't know either. No answer here.

Who proposed? Branden and he did it really cutely too. First he was going to propose on my birthday, but chickened out and just gave me the ring as a "promise ring".  Then he did for real a few months later at a YSA dance he took me upstairs and did this game show thing.. it was pretty cute. I about ruined it though because after I won the game show as my prize he took me blindfolded into a room (and hte room was all decorated with twinkly lights and cuteness) but when I was still blindfolded I felt one of the light cords and thought he was putting a snake on me and freaked out... sooooooo not romantic Robin!

Who has more siblings? Branden does. I have a brother and a sister, he has 2 brothers and a sister.
Who wears the pants? Both of us I would say. We come to pretty much all decisions together and both of us HATE it if the other tries to tell us what to do, so that never happens successfully.
Posted by robinm at 7:41 AM

I'm curious - did you get a different ring than the promise ring? Did he give you anything with the "real proposal"?

Nope. same ring. He was going to buy another one, but I didn't want another one. I loved the first one. it was small and simple and exactly my taste. I'm not a jewellery girl so the idea of wearing more than one ring was not good to me. so we stuck with just the one.