My dearest baby Jack was quite a puney little peanut when he was born. He came 2 weeks early and was only 6 pounds 13 ounces when he was born (which I am grateful for because I honestly don't think I could have managed anything larger, forceps snapping mid-delivery signify thats about all the baby I could handle). Its funny because before I had Jack I always said I wanted a big ol' fatty of a baby. I always thought fat babies were cuter than small babies. But I have to say my son was the exception to that rule. As tiny as he was he was totally adorable. No mutated head, he didn't look like he was anorexic or about to break, he was simply beautiful and I know its not just my motherly bias thats saying that. For the first few weeks of his life people would always say to us "he's really adorable, no I mean really adorable most newborns aren't". You know when people say that they are telling you the truth.

Anyways since his birth Jack has not stopped working on giving his Mommy the fat baby she always desired (although he's still not fat, he has a scrawny legs and tushy like his Daddy). We had his one month well baby doctors appointment on Tuesday and my little man weighed in at a whopping 9 pounds 11. ounces. He has put on nearly 3 pounds since he was born! Its ridiculous. I barely recognize my little guy anymore when I look at birth pictures! He's still adorable, just a whole lot more of him! In fact he now weighs what his best friend Ben (Jon and Jenn's baby) weighed when he was born.. he'll catch up one day!!

Jack when he was born 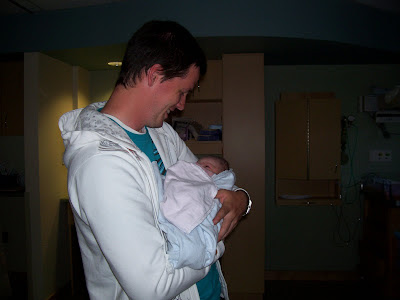 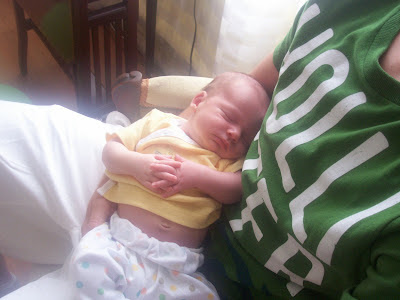 robin he's getting big!! i love it. and i love your blog. i'm so glad you started one! i hope all is well. i miss your guts!!