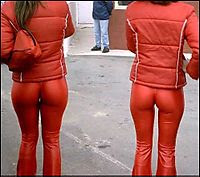 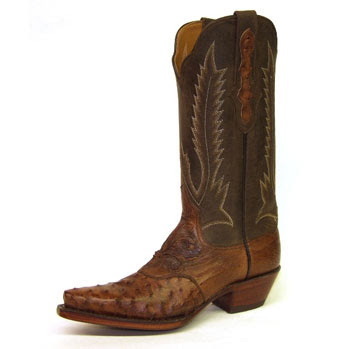 I'm sure you all thought I had forgotten about memory corner, but alas, I have not! I just wasn't so into it for awhile. But the other day Branden and i were chorkeling about a memory of ours so I thought I'd write it up for posterity.

When we found out we were pregnant with Jack we realized we would have to move to a new apartment. We were living in a really nice apartment, that was to small for babies and was going to be out of our soon to be reduced by maternity leave budget. So we began our search. Touring apartments is always an interesting venture and you meet the most interesting of landlords/slash/building managers. One Building Manager was particularily memorable to us. He was the funniest looking guy ever and he really thought he was smooth. This man wore the tightest pants ever (hence my above picture) and these insanely tight pants were tucked into cowboy boots. He had a grey mullet that was slicked back with about a pound of grease. We had to hold in the chorkle's just looking at him. And he fancied himself quite the ladies man, he was flirting with every tenant of the female persuasion we came across. He was truly ridiculous! Anyways he showed us the apartment and we were not impressed and had no desire for it. However, wanting to avoid an akward situation when he offered us an application we said we wanted one. He took us to his scary, dank office to get one. But couldn't find it. He spent 10 minutes with us akwardly waiting in his office looking for it to no avail. He eventually decided that he had copies in his apartment and headed upstairs to get them leaving us in his office. Well, since we had no desire for this apartment, were sick of waiting and were really only taking the application as a courtesy/slash/ to avoid akwardness for ourselves we decided to just leave. We were afraid he would come back and catch us though so we quickly ran out what appeared to be the closest exit. It was NOT an exit, and this building was an unknown labrynth. SERIOUSLY we got so lost there were so many corridors and underground parking and we couldn't get out. And we were TERRIFIED of getting caught by this guy. WE ran frantically around looking for an exit thinking we were hearing the clickity clackity of his cowboy boots coming to get us. We were laughing so hard and so terrified. WE finally got out of the building but were so far from where we had parked, so we ran (slipping on the ice multiple times) still terrified this guy was going to track us down ( I don't know what we were thinking). We were so scared and out of breath by the time we got to the car and peeled out as fast as possible! It was quite a hilarious experience for us.
Posted by robinm at 6:39 AM

Robin, I know EXACTLY who you are talking about. Remember Mark and I went to that same place when we were looking?? He also had the body shape of a funnel - remember the huge shoulders? That place was definitely a dive. Unfortunately, Mark and I saw far worse on our hunting. We still cried every time we passed that apartment afterwards.

oh my goodness. i can just picture the 2 of you. so funny! i swear, you always have the most ridiculously entertaining stories. i'm so glad you escaped :)

oh and about those red suited ladies...how does that person on the left's crack go so high?