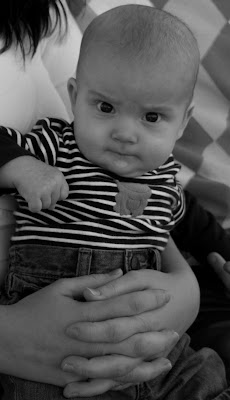 Yesturday was Jack's Nine Month Doctors appointment. Just the usual check up garbage.
His height is now 28 inches, right in the 50th percentile which he always has been in height and weight. His head size also 50th percentile (which is good because it always was, then randomlly last apointment was 90th, apparently his head just grew before his body). Then his weight was so weird. He's always been right in the middle, like I said 50th percentile, but not so much this visit. He's in the 10th percentile in weight, which is a huge drop and the doctor was rather concerned. He weighs 18 pounds 5 ounces and has put on less than a pound in the last 3 months.

I had to spend forever telling her all about his eating habits, sleeping habits, activity habits etc. so she could figure out why he is all of a sudden so skinny. Which is so weird, I thought he was a little chunker, but apparently not! Anyways he eats really well and alot, the doctor observed him playing for a bit and after talking to me decided there were two reasons he was so underweight.

One, because he still sleeps like turd. We did the whole cry it out thing and it worked to a certain extent. He went from 6 to 8 wake ups a night to 3 to 4, but thats still terrible for a baby his age. She says with waking up that much he's not spending enough time in REM sleep and its in REM sleep they grow and gain fatness so he's just not getting that chance. Add to that he decided lately naps are for losers and we really have to work on his sleep. So she gave us some tips and we have to be even more diligent with crying it out because the kid just needs to learn to sleep so he can grow properly. seriously though my kid is a lemon in the sleep department apparently.

The second reason he's so skinny is because he's so active. those of you who know Jack know he never stops moving. Even lying down he is always rolling his ankles and wrists, its the weirdest and cutest thing ever to watch. But he is always on the move and since he sleeps less, he moves more and ya. So, we have to start giving him really high fat foods. Most of what he eats now is fruits and vegetables, but now the doctor says we have to add in alot of egg yolks, yogurt, cheese and more calorie dense foods. She also said to use major butter in whatever I cook for him.

So Operation Make Jack gain weight begins, wish me luck and if anyone has any advice let me know!
Posted by robinm at 9:55 AM

Oh wow, that's no fun. We had major sleep problems too and also the get-the-kid-fat issues.

CIO worked for the most part, but the thing that REALLY worked for us was having daddy put him to bed consistantly. Apparently he sleeps better when I'm not the one putting him to bed, because he knows that daddy can't be messed with like mommy can. In fact my hubby had to work late almost everyday last week and Jared's sleeping habits tanked. But he's been back on track since daddy's been home at nights and putting him to be again.

With the weight thing we give him lots of whole milk. He loves it because he loves bottles and that's what he get it in. I'm sure we'll have problems weaning him off the bottle since I was supposedly supposed to stop giving it to him at 1 year, but at least he's getting the calories he needs, since he hardly ever eats on his own.

All I know is that I pray for the day MY doctor tells me I need to eat more calories, especially cheese and butter! Lucky little Jack!