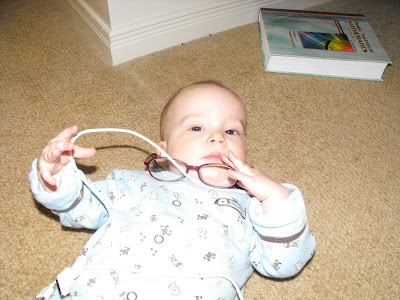 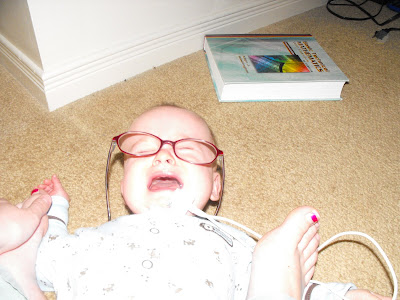 Yesturday was Jack's first eye exam. It was an interesting experience to say the least. He was thoroughly unimpressed with the covering and uncovering of his eyes. Didn't like the dark, but was DYING to grab the crazy giant glasses things off the optometrist's head. We have to go back in 6 months because he is slightly cross eyed and far sighted. Both are normal for his age, but because of my ridiculously bad vision and majorly crossed eyes from such a young age they want to make sure its gone in 6 months. Hopefully the next one involves less crying! As you can see I decided to see what he would look like with glasses on last night, but he kept taking them off before I could snap a picture.. so OBVIOUSLY I had to pin down his arms with my feet to take a picture with my spectacles on him. He clearly was not impressed.
Posted by robinm at 5:22 AM

OVIOUSLY. lol so hilarious. i love it.

they do baby eye exams? i didn't even know that! maybe i should get on top of my baby knowledge ;)

i love the glasses. and i love that you've pinned him down with your feet and it looks like he's screaming bloody murder.

oh and i love you!

Is there a specific reason you should get on top of your baby knowledge Jacq??? hmmm... and ya I'm a horrible mother, he was screaming and screaming with my big stinky feet holding him down.