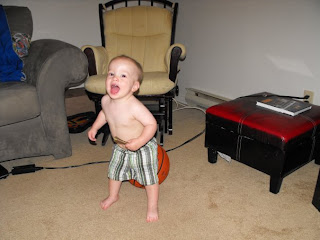 I think its fair to say that my child is a smidge on the psycho side of the spectrum. He comes by it honestly though having been born to two parents who have been known to get a little out of control from time to time. But somedays this child is just unstoppable in his craziness.
Lets take last night for example. Jack was excitedly running up and down our hallway (as usual) and got a little too excited at something and ran smack into the wall (this happens more than I would care to admit). But this time was an extreme. After his wall collision he cried for about 15 seconds and then went on running, spent some time on Brandens lap, but seemed fine and normal.
A few minutes later Branden notices some red stains all over our carpet and starts asking me what on earth I've done to the carpet. That's when we look at Jack who's toe had been sliced open on the baseboard upon his wall collision and was bleeding QUITE profusely and tracking it all around the house. There were little bloody toe prints EVERYWHERE and since he'd been on Brandens lap oodles of blood had dripped down Branden's pants and were covering him!
Here is my poor hurt and very bloody baby who is not even making a fuss about this. That is until we went and washed it off and band-aided it. He was not impressed with the Band-Aid. He doesn't' like having stuff stuck to his foot (he freaks out if he steps on a piece of tape or plastic and it sticks to his foot) so he was unimpressed. But seemed fine once we covered it with a sock. He even hopped up on our bed and spent quite some time jumping and marching around. Until we noticed he had bled through his Band-Aid and sock and was leaving bloody toe prints all over our sheets. Then we searched our house from top to bottom and found one lonely robeez to put on him to keep the blood in place. It was a catastrophe and he looked RIDICULOUS!
But this didn't' stop him from running around, throwing his chair all over the apartment, crawling when the foot hurt to much and just plain being insane last night. It didn't' stop him from marching on the spot for 5 minutes at my feet or climbing back up on our bed to jump for another 10 minutes. This child is just out of control!