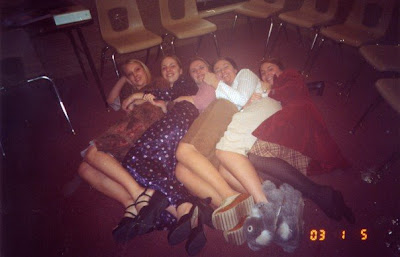 This is the group of ladies I travelled to YSA stuff that summer and were witnesses of this event (actually I don't think Hilary was there that particular time,but she usually was)
The picture is Hilary, Heather, My sister Sarah, Me and Jacquie.
Recently I've been reading through my old journals while in the bathroom (too much information I know). I've been reading my journals from my teen years and I laugh and laugh and laugh at myself because honestly I was ridiculous and also I had forgotten many of the hilarious things that happened to me when I was younger so I have decided to institute on my blog Memory Corner where once a week (or so, basically whenever I feel like it) I will tell a story from my past that  I think is funny or important in some way or another.
Today I share the T-Rex story.
Way back in the day (which was a Friday in case you were wondering) my dear girlfriends and I were heading off to a YSA conference in Kingston. We arrived rather early so we hit the mall in town and were (for some unknown reason) browsing around toys r us. We found this jumbo t-shirts with a t-rex on them which for some reason we thought were hilarious and were joking about wearing and walking around the store holding our arms up in perfect T-rex fashion pretending to be t-rexs and saying in a growly voice "I"m a t-rex". I know this sounds retarded, but 4 girls together equals much silliness and ridiculousity.
Anyways fast forward to the conference. The second night there was a dance in a building by a harbour and it was the hottest building ever so everyone was sweatier than you can imagine (this doesn't really apply directly to THIS particular story, but I thought I would mention it anyways). Anyways after the dance we were walking back to our car and the boy that I liked at that moment was walking along beside us and started talking to me. And honestly I was such a spaz around boys I liked. I was super chill with boys when I was just friends with them, but when I wasn't friends first and just liked them out of nowhere... TOTAL spaz. I was (and still am, even with Branden now) about the least smooth girl you will ever, ever meet. So anyways he starts talking to me like a normal human being and I spaz out and all I can think of to say is "I'm a T-rex" in the ridiculous growly voice, with my arms raised up like a t-rex and then I ran away. ARE YOU SERIOUS? its probaly my most ridiculous moment ever. It was a tale told around YSA for years to come and everyone always mocked me by saying "I'm a t-rex" in a ridiculous growly voice, with their arms raised up.. UGH. So embarassing, yet still to this day I honestly think its hilarious and am proud of myself for being such a tool! (needless to say NOTHING every became of me at that boy, but a hilarious story!)
Posted by robinm at 2:32 PM

There's something a little different about your footwear in the picture, compared to everyone else's... ;)

good observation heather. lol. robin...this is hilarious!!! i completely forgot about it but all the memories came flowing back as you replayed them. what the crap were we thinkin?? lol "i'm a t-rex"

so hilarious. i love this story so much and wish i was there. i will look forward very much to memory corner and think it is a genius idea. i didn't even notice the footwear. very observant heather.

hahaha oh hideous footwear, what was I doing?

Robin, this is hilarious. I had an entry on my lj about six or so years ago about pretty much doing the same thing. It went something like this:

Him: It was okay. I had a class with-

Me: yeah this ONE time, my best friend Lindsay and I were in a class, and the teacher said something about moose and I snorted. [oh my gosh] Hahhaha

Me: Hahaha, I'm not really that scary you know, even though I stalk you, hahaha! You hate me don't you? [high nervous laughter] Yeah, so I guess I'll leave now that I've said my usual obligatory hi... but don't forget you owe me a hello now, ahahahaHAHAHAAAAAHAH
HAAAAAAAA

I'm still amazed I managed to get married.

I totally remember that conference - it was SO deathly hot at that dance!! I got completely dehydrated and missed the testimony meeting the next morning because I couldn't stop throwing up. I remember spending a bunch of time hanging out with you and Jacquie too, but I'm pretty sure I wasn't present for the T-rex incident..