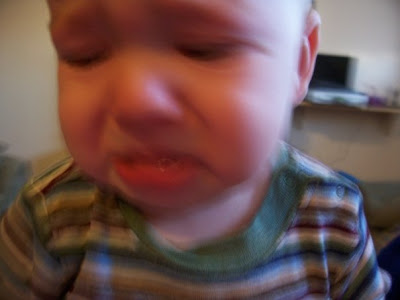 Last week we had Jack's six month appointment/slash/shots with our Doctor. Branden came with me this time which was nice since Jack screamed his face off when he got the shots (and oh joy we get to go back tomorrow for a flu shot!).  When we were there we talked to the doctor about Jack's sleeping habits. Despite a few freak nights where he's only woken up once or twice on average the kid has been waking up between 6 and 8 times a night and I was getting pretty sick of it and far to exhausted to survive! I was feeding him atleast 3 or 4 of those times because it just made it faster/easier to get him back to bed.  The doctor stated very matter of factly that I have been spoiling Jack and if I keep it up he's going to expect it for the next few years and that we needed to start letting him cry it out. She told me to try it a few weeks and see how it worked and to just wake up with him once to feed him about the middle of the night. She said to go in and check on him when he cried but not pick him up or comfort him. I was not impressed to have to start this!
So that week we went home and began our quest to let Jack cry it out with his afternoon nap. He woke up 3 times screaming his face off for a good 10 or 15 minutes each time before going back to sleep. I was a wreck. I was crying and so upset. Branden was so wonderful comforting me and trying to make me feel better, but in my emotional state I decided to yell at him like some insane irrational beast. Apparently hearing my baby cry makes me CRAZY! But he continued to be understanding. His nap was so hard I did not think I could do it through the night, but Branden made me promise to try. That night he woke up 3 times screaming before I even went to bed, it was TERRIBLE. I went to sleep about 10:30 and he didn't wake up again until 1:30, I fed him put him back to bed and he slept until 7:30. INSANE!
everynight since (except one freak night he decided to wake up at 2:30 am and play in his crib) he has only woken up once in the night to eat. Its amazing! Its taken me a few nights to get used to it (who knew your baby sleeping better could be SOOOO painful for your poor chest!) but now I'm sleeping better than I have in months and for the first time since Jack has been alive I feel well rested its amazing!
I'm so shocked it worked so fast! Either I have a genius baby or crying it out really does work!
Posted by robinm at 12:21 PM

It works better for some babies than others. And it's super hard. I totally hear you on hating it, but I have to admit, it worked for us too. Beware though, some people will tell you you're the worst person on the planet for doing it. :P to them. I think you're awesome :)

hahah thanks.. I"m sure some people will think I'm terrible, but you have to try everything right. I don't think I would have been able to keep it up for very long though if it hadn't worked so quickly!

Aww... what a cute sad face!! And I hope you don't feel like you're a terrible mother for trying this out! We have to do it in Nursery when the kids cry for their moms, and even though the kids aren't mine is KILLS me, but it does work. I'm glad it worked for you!