Well I'm still unable to sleep from Jack wakings so I thought I would move up my schedule and move on to my second round of Memory Corner and hope that effort makes me tired enough to actually sleep.
One summer some time ago my good friend Kevin came down to visit me in my hometown of browntown.  As part of that weekend me and my friend Jacquie decided to take him and our other friend Andrea to the rope swing. The rope swing is a thing frequently visited in my youth, I spent one summer going their almost everyday with a large group of my friends. It is basically a rope tied to a tree over a dirty grimy river. You, as the name of it clearly implies, swing out on the rope and drop in the dirty grimey river. Doesn't sound to exciting now, but it was alot of fun! 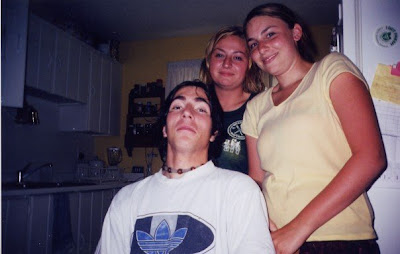 Picture of Kevin, me and Jacquie after our rope swing trip. Please forgive my hideous blond hair stage and welfocity (I had just jumped in a dirty grimey river after all).
So off to the rope swing we went this Saturday afternoon. When there Andrea decided that she didn't want to actually  jump IN the dirty, grimey river so she decided just to swing out on the rope and come back in. However, this was a big failure for her. As the rope swung out and back in Andrea missed her footing on the ground and swung back out again screaming all the while. Kevin, being the big strong man he is, decided it was his time to jump in. He yelled  out "I'll save you Andrea!" in his most heroic voice (which sent Jacquie and I into our first fit of hysterical laughter) and he jumped out to save her from the rope. He failed at this effort miserably!! He grabbed onto Andrea and the Rope as the swung back in, but did not have a good grip on the ground himself and out onto the rope he went with Andrea and they both went tumbling down into the river. Oh my holy heck did Jacquie and I think this was hilarious we collapsed into laughter as the two of them climbed out of the river. They were unimpressed, but Jacquie and I laughed and laughed and laughed. It was a grand day and we mocked Kevin for his failed heroics for years to come! 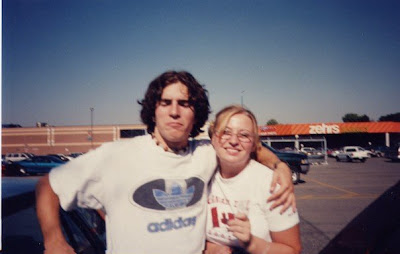 Kevin and I later that day, clearly he had forgiven me, but is making a very strange face for some reason?
Posted by robinm at 1:35 AM

i love memory corner!! i want more!! lol. everytime i see that pic of the 3 of us, that whole scene comes running back into my head and i still laugh about it when i think about. oh kevin. lol

hilarious. i was laughing out loud. keep em coming!