Days away at Grandma and Grandpa's

On Wednesday night last week at midnight the expansion to the computer game Branden loves came out and we both knew he would be obsessed at first. He walked to the video game store at midnight got it and played all night. Thursday morning (in order to save our marriage and allow him the freedom of a few days of indulging in computer games) I dropped him off at school and headed to my parents house for a few days so he could enjoy his computer and Jack and I could enjoy my parents.
When we got to my parents house we decided a fun way to spend the day would be to go and visit my very pregnant older sister (she is due Saturday YAY!). We had such fun. I haven't seen her house since they've done a bunch of renovations so it was good to see. Jack christened all her baby (Elron as we call him in utero)'s stuff.  He played in her jolly jumper and loved it soo much so we've borrowed it for now.  WE had lunch together, then decided to go shopping. The girls perused while my Dad watched Jack in the stroller on the benches.
We went to baby gap and their were several ladies from my sisters ward that worked there and wanted to see Jack. So I went out and got him and brought him in, just to discover he had taken a GIANT duece and it had gone everywhere. Luckily baby gap is well equiped with a washroom and baby changetable as well as plastic bags. He had pooped eVERYWHERE it was the most enormous poop of all time. It was in his socks and all the way up his back, almost in his hair. All of his clothes were finished. ITs a good thing we were in baby gap because his wonderful grandparents bought Jack a new outfit. I'll have to take a picture soon, but he got the CUTEST shirt ever that says "I'm kinda a big deal" (quote from anchorman for the will ferrell impaired) and Branden has a shirt that says the same thing and I'd been looking forever for one for Jack. We were so lucky and he got cute knee high socks and cute sweat pants that will be super comfy for winter and warm! I secretly think the kid just wanted new clothes so he chose well where to crap his pants. Thank goodness for grandparents eh! 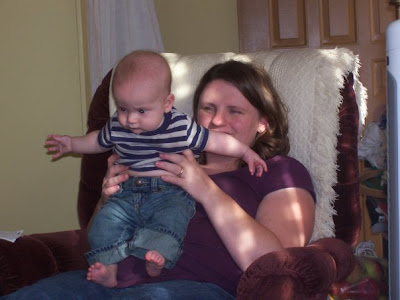 Jack sitting on his Cousin Elron and His Aunt Sarah
After the mall we headed back to my parent house, where Jack proceeded to not sleep but scream until 11pm and then woke up about a billion times that night. So the next morning we were set to go swimming with Grandma and Grandpa, but I was to exhausted so Jack got to have his first outing without me (we've left him with people, but he's never gone out anywhere without us). He went swimming with them and my parents said he was so good, didn't cry at all, charmed all the old ladies at the pool and was obsessed with splashing everywhere and everyone and then wiping his cute little face with the back of his hand. I was sad to miss his adorableness, but glad for the break. 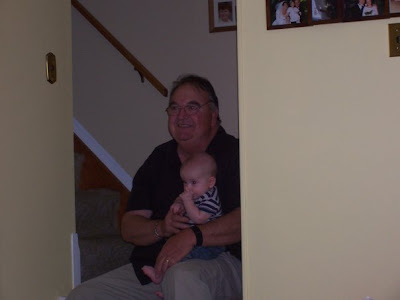 Jack and his very proud Grandpa!
My mom and I did a bit more shopping that day, just looking around mainly and hung out. For dinner my Aunt sue and cousin Zach came over and Jack always loves them. Then Jack and I headed home to a very lonely Branden who was over his game and ready for me and Jack time. It was quite a fabulous weekend! 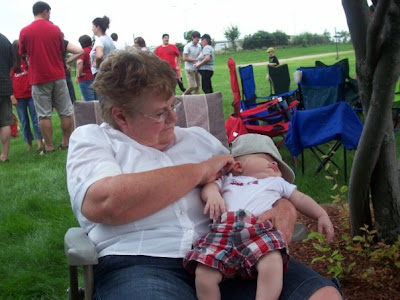 Jack and his adoring Grandma.
Posted by robinm at 5:47 PM

some friends of ours invited us. there's 5 couples going, we rented a house. should be pretty fun!