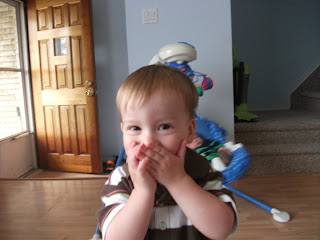 Right now Jack's language is developing like crazy, but he has a few things he says not quite right that just make me laugh like crazy and I want to record them so I never forget how perfectly adorable he is right this moment.
Jack is a blanket guy, LOVES his blanket. Only he doesn't say blanket quite right.. or right at all. He calls his blanket his Beyes. Like eyes with a b on it. its sooo cute. He also doesn't quite say mine right yet he says Meyes. so he walks around all the time looking for his blanket saying over and over "meyes beyes, meyes beyes". We love it.
He also apparently has not comprehension of how to actually pronounce thankyou. so whenever prompted to say thankyou he says "guy guys" or if you prompt thanks he says just "guys" soo weird. and apparently he's obsessed with the eyes sound. Its so cute though.
Also all done is "gall go" LOVE IT! I almost dread the day he starts pronouncing all of his words correctly.
And lest you think my child is mildly stupid, he says most words correctly just these ones are off and its hilarious for us.
Posted by robinm at 3:18 PM

You totally record his voice! We did that with Jared once and the plan is to do it every year in January. http://www.youtube.com/watch?v=x3Odu1XQUow