Well apparently I stink at blogging lately, but I strongly desire to get back into it because guess what? I also stink at journaling and my boys are pretty much the cutest thing that have ever existed right now so I just want to remember everything about them.
So here is the post blogging vacation synopsis. 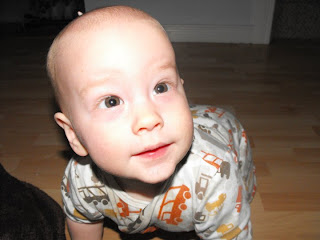 Dean 7 Months
Dean is the best baby of all time. The kid is always smiley and happy. He is a HUGE baby compared to what Jack was. 75th percentile for height and 50th percentile for weight. Compared to the solid 15th to 20th percentile Jack rocked for the first while of his life he's enormous to us. His physical development is crazy. The kid crawled super early and in the past few weeks he's been cruising like a champ and even mastered the stairs a few days ago. He loves cruising more than anything and is so proud of himself whenever he can follow us around. Yesturday he grabbed one of our kid chairs in the kitchen and was pushing it around to walk. He's out of control. He is the sweetest and most fun child ever. I have seriously only heard him really balls out cry once since he was 6 weeks old and that was last sunday. Our new house is heated by a gas fireplace and it got cold before we got a gate for in front of it and he slipped away from us last week and put his hands on the glass and burned the crap out of 3 of his fingers. He screamed and cried for hours until tylenol kicked in. he had 3 HUGE blisters and it took awhile to treat and bandage them, we thought we were in for a terrible week with the poor kid and his injury but since it happened he's been surpisingly good about it. Poor, poor child. 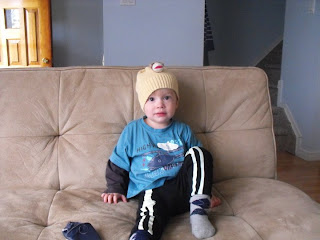 Jack 2.5 years
Jack is most days the cutest toddler in town. He definately has his moments lately though. He is really into asserting his independance which is fun, but challenging. We've been a bit worried about Jack's speech for the last few months, he has a TON of words, but his annuciation is lacking and he tends to smush words together. We went to a speech therapist and pretty much Branden and I speak to fast hence the smush. So we've been working hard and he's really coming along with his communication, which is helping with some of the frustration he's had. Jack though, is the funnest child around. He is never shy and just runs around playing with anyone he can find. He has the cutest flirtiest smile and just wins my heart over a million times a day. He's really getting into pretend play lately and loves to pretend to make me food, pretend to be a dog, pretend to be a frog, its pretty hilarious. 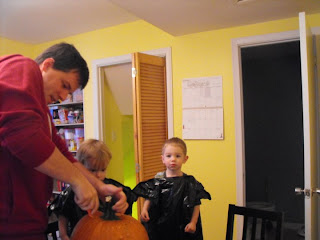 Branden 26 years
Branden is back for his final year of school (thank goodness) and its going well. He works HARD and is gone for 10 hours Monday through Thursday. Luckily he has no classes Fridays so we always get a 3 day weekend together. He's doing really well and working hard at school and his part time job at the school. He commutes to Kitchener everyday with is friend Jordan who is living in our basement. Its nice in some ways because Jordan drives him so I get the car everyday which certainly makes entertaining the boys easier. 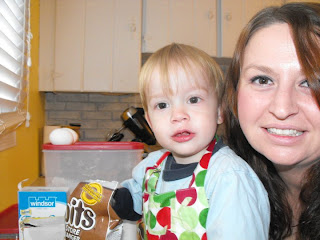 Robin 27 years old
I am doing well. I love being at home with my boys, I love being nearer to my parents, I love having my own home to care for and improve. I do miss my friends from kitchener but we are really loving life. I am DREADING the end of my maternity leave. Branden will be almost done school by the time I finish my mat. leave so I won't have to go back to work full time hopefully. I think I will find a part time job though so we can get rid of school debt as soon as possible! I have been getting back into crafting lately and I'm really loving it. I'll have to post some of my projects as I finish them. I have about a million started and few actually finished.
What have we been up to lately? 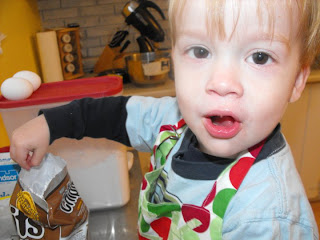 We have been baking, baking, baking. Jack is OBSESSED with helping me bake. Everyday "mama I stir" "make cook cook". Mainly he dumps crap in the bowl, stirs for a minute, gets bored and then sneaks chocolate chips. Its pretty hilarious and adorable. We bestow our bakings on others often because we would be major fatties if we didn't. 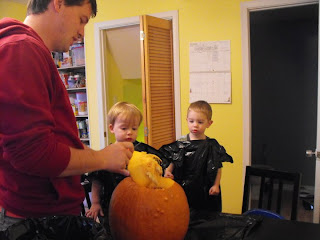 Pumpkin carving with our cousin. The boys loved watching but NEITHEr would touch the guts. I had to gut the thing. I was schocked because I just assumed two 2 year old boys would love pumpkin guts. ESPECIALLY these 2, they are insane and gross and so totally boyish. But they did not have pumpkin gut love. We did all have fun though. 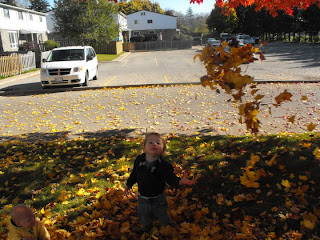 Playing in leaves. We live in a condo townhouse and in the complex there is a sweet old man Charlie that does alot of the maintenance. He is super nice and rakes all the leaves into piles around the condo for little ones to jump in and my little ones have LOVED playing in them. Leaves are definately the funnest part of fall for these two. Jack loves jumping in them and throwing them and Dean loves eating them. 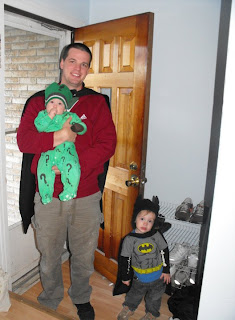 We have been halloweening. We had great fun this year because Jack atleast semi understood it. I made the costumes. Jack was batman (I made the cape and batman hat and we used a t-shirt he already had) and Dean was the riddler I dyed and question marked the sleeper and hat. Jack was OBSESSED (and still is) with his cape. I made it double sided so it has batman one side and super jack other side. He loves wearing it and flapping his arms and screaming that he can fly. AT the last minute he really wanted his daddy to fly too so I made Branden his own cape. I think I'll work on one for Dean to so he can also fly. We went to our wards trunk or treat and brought my friend Julie her husband and two girls. We had a great time although it was freezing and got enough candy to last us quite awhile.
And if you've made it this far in my massive update (which I doubt many have) you get to hear all about my favourite thing. 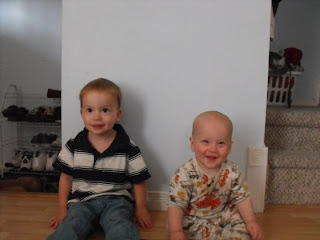 These two boys are becoming best friends. They adore eachother. Dean thinks Jack is the funniest thing on the planet and follows him around laughing at him. And Jack loves being adored and loves his brother. He hugs/slash/tackles/slash/drags him a thousand times a day and they both laugh and laugh. If either is grumpy you bring them to the other and they are very likely to cheer right up. I LOVE my boys and I LOVE watching them become friends. 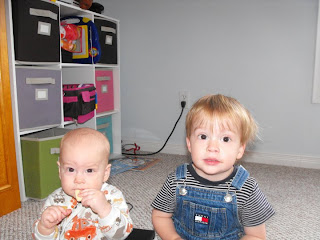 so cute. good update. i love charlie! how nice of him to make the leaf piles for the kids, that is adorable! i can't believe you're such the crafter. will you please come over and figure out how to fix my sewing machine? lol

Yay! I loved this update! Your boys are adorable & I love that they are little friends & amuse each other :)