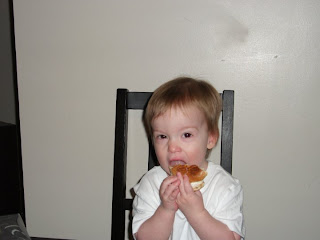 So yesturday Jack and I were at the grocery store picking up some gingerale and other assorted items for Branden who was home with Dean and a sick tummy. One of the assorted items happened to be chocolate in nature and this was the item Jack was assigned to carry. Once we got to the checkout and were stuck in a rather long line Jack decided he had had enough of carrying said chocolate goodies and wished to eat them. I quickly advised him that we first had to pay for them. Jack mistook the need to pay for them for the need to PRAY for them so right there in the middle of the line (much to the entertainment of our fellow line waiters) he plomped his bum down, folded his arms and prepared to pray. It was hilarious and of course I couldn't resist his extreme righteousity so i opened it up and let him have one in line. If your willing to sit and pray in the middle of the grocery store you definately deserve chocolate.
Posted by robinm at 4:16 AM

Hilarious! I love it. Would have been the cutest sight to see. By the way, it was SO GOOD to see you. I'm just so sad it was so short :(