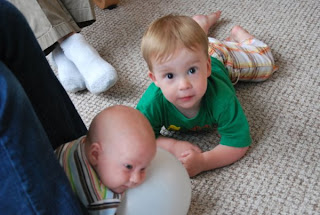 My little Dean is pretty much the craziest, best baby of all time. The kid already only wakes up once a night (and sometimes even manages to sleep right through) he smiles all day unless he's tired or hungry. He laughs at the drop of a hat and thinks me, Branden and Jack are hilarious. He stares at his brother with awe all the time and is soo impressed with Jack. He rolls like a crazy man which si taking some adjusting on Jacks part. If we place Dean down one place he can now be across the room in a matter of seconds and Jack is not used to avoiding stomping on a moving target so we've had a few accidental stomping incidents. Dean is already army crawling. its crazy, he's not even 4 months old yet. The kid is simply out of control.
We adore him though and he is turning out to be soo much fun for all three of us.
Posted by robinm at 12:03 PM