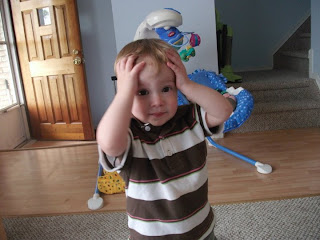 Jack lately is literally both the light of my life and the bain of my existance. He is pretty much the cutest thing ever. His language is progressing like crazy although its hard to pick out if you're not his mom. The problem in our house with language development is that both Branden and I are major fast talkers so its hard for Jack to pick out sometims what we're saying. We've been trying to slow down a bit with him in mind but we've also noticed he's talking alot more than we give him credit for. he just smooshes words together and says them SUPER fast. He's got sentences like a crazy man but you have to listen real carefully. Instead of saying "we've got to go" he says incredibly quicly "weguddago" and where did it go? is "wheredigo?" and so on a so forth. tis great, but we better slow down or his teachers will never understand him.
Jack is amazing with Dean. He plays with him an d kisses and hugs him like mad. he is an amazikng big brother. Jack is also the biggest flirt in flirt town. He is always playing with all the lady babies in our new ward and smiles and jsut gives him his best behaviour. He is SOOO much like Branden its ridiculous, but I love it!
On the other hand Jack has hit the terrible two's full force. Most days hes still sweet and cute and the best kid ever, but ask for a diaper change or dare to not get him a snack the second he requests it and hulk jack appears. I beg I plead for him to return to bruce banner as I laugh at his baby rage, but it doesn't work.. UGH. Good thing its short lived and not often or I might run away.
Posted by robinm at 12:15 PM