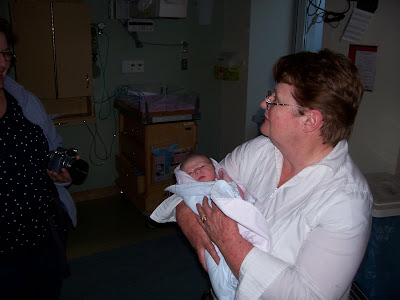 Today is my first Mother's Day as an actual Mom (last year was just a week before I had Jack). I want to start off by recognizing my own Mom who has taught me so much about how to be a Mom. My Mom is great, she is the least selfish person I know. She is funny, an amazing listener, strong, smart, spiritual and just all around wonderful. I don't think I'd be half the Mother I am without here example. I love you mom!!

Next, lets talk a little about how my day went. I woke up early with Jack and he was perfectly adorable and somewhat cuddly for a bit in the morning and then became ridiculously whiney and tired all of a sudden. So we had to give him a nap before church which in turn made us late for church. Branden and Jack did, however, present me with my Mothers day gift of Hypnotic Poison perfume. It is my favourite perfume EVEr and I ran out a few months ago, so I was pretty happy.

Then was church which was quite delightful and Jack managed to hold it together reasonably well. after church naps and then Jack woke up. I noticed when I went to grab him toys that his play pen was covered in pen. The day before he had somehow found a pen and bit it in half and gotten ink all over himself. It took us forever to clean him up and we didn't even think to check his playpen. Today I discovered the mess. pen all over his toys, the carpet is blue from one end to the other. UGH. Branden and I spent hours scrubbing it and we have most of it out, but ground zero (where the initial explosion happened) is still a mess! UGH! Then Jack spent the evening whining, we put him to bed early and awhile later heard massive crying went into check and he had pooped out of his diaper and onto my bear Branden got me he sleeps with. My kid dumped on my teddy bears head! oh man, that took awhile to clean up to!

So parts of today good, parts bad. Tomorrow work starts so hopefully that goes well!!
Posted by robinm at 5:25 PM

WOW! what a day. haha. i've never even heard of that perfume. it sounds sensual or something. haha. i'm gonna have to seek it out to give it a whiff. :) i hope today goes well for you. good luck!

BUMMER about the pen darling!!!

Good luck with work... I hope that things go well for you and that your sweet little guy does alright too!!!